Kannazuki No Miko Wiki
Register
Don't have an account?
Sign In
Advertisement
in: Characters, Female, Student,
and 2 more

Himeko Kurusugawa (来栖川 姫子, Kurusugawa Himeko?) is the main protagonist and heroine in the anime. She is the Solar Priestess and the childhood friend of Sōma Ōgami.

In both versions, regardless of their reincarnated forms, Himeko is reunited with Chikane Himemiya.

Himeko is a beautiful teenager of medium height with thigh-length honey hair that is tied with a red ribbon in the back and purple eyes.

She is often shown wearing a school outfit at which is a red dress, black stockings and brown boots.

Himeko is a shy, innocent and timid girl who has the sweetest voice out of everyone, but she is uncertain of her own worth and abilities. This is mainly because she was orphaned at an early age in an unknown manner after her parents’ deaths. She was initially adopted by several relatives before being moved to other relatives. At school, Himeko seems to have only one friend named Makoto Saotome (Himeko's roommate).

Despite her timidity, Himeko gradually becomes more determined and courageous; realizing and accepting her feelings for Chikane Himemiya during the last few episodes.

In her childhood, Himeko‘s parents passed away under unknown circumstance. It can be inferred that before that, her life with them was fairly happy as at the start of Episode 3, a flashback reveals that her father offered to turn a seashell into a pendant. After their deaths, she was raised and abused by unnamed relatives. She ran away and started living in a boarding school. In the manga, Himeko was not actually born in the village and was shipped in with a bunch of other orphans.

In Episode 1, Himeko is woken up by Makoto Saotome (Himeko's roommate). At school, on the stairs, she almost fell but Chikane Himemiya caught her. After this, Chikane invites her to the rose garden in the afternoon. Here, Himeko and Chikane had lunch together, took pictures, drank tea and Chikane invited her to her birthday. Himeko tags along with Sōma Ōgami to go shopping and bought Chikane a present. When the Orochi arrived, she separated herself from the others and returns to her room to rescue Chikane's present. She is captured by an Orochi, Soma, and became unconscious. After Soma came to his senses, Himeko receives her solar symbol on her chest and falls, but Chikane catches her. When she became aware, she and Chikane shared a kiss.

In Episode 2, Himeko and Chikane learned about the priestess and when Kazuki Ōgami revealed the fact that Soma is one of the Orochi, Himeko faints. When she came back to her senses, Himeko remembers Makoto and visited her at the hospital and blamed herself for her injuries. With nowhere to go, she contemplates on leaving the town, and when she talked with Chikane about this, Girochi attacks, but Soma saved Himeko and Chikane.

In Episode 3, Himeko comes to live with Chikane. At school, Izumi and her group (Misaki and Kyoko) act jealous toward Himeko and pushed her down the stairs, but Soma caught her before she fell. Chikane witnessed this and gives Izumi a "look" that made her afraid. Himeko tries to visit Makoto but turns around. They started training but Himeko hesitated and Chikane wound up injured as she protected her. After they spent time together, Chikane promised her that she will protect her. When Nekoko attacks, Himeko is separated from Chikane underwater, but Soma arrives in time to save them. 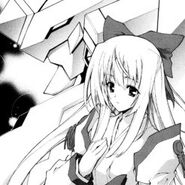 Himeko's appearance in the manga

Community content is available under CC-BY-SA unless otherwise noted.
Advertisement